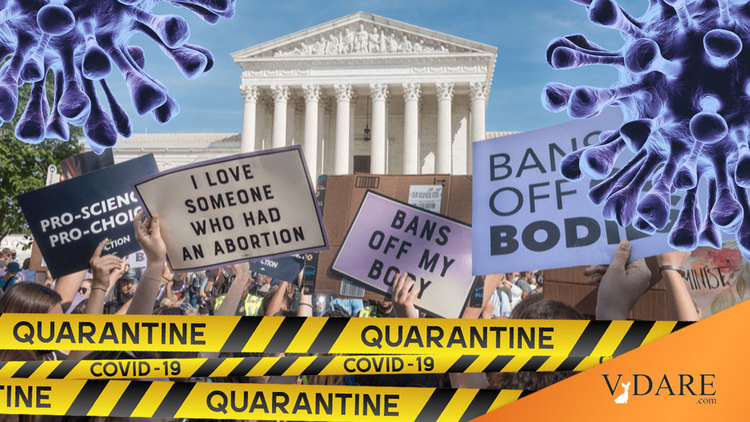 I guess Democrats realized that having feminist harpies fan out across the airwaves to shriek about the vital importance of aborting babies wasn’t helping, because we all woke up Monday morning to …

A NEW SURGE OF CORONAVIRUS!

Maybe that will distract the dingbats. They probably all think they have “long-haul COVID.”

On the other hand …

2) The “extreme power” Hillary’s talking about is: letting people vote.

Rep. Eric Swalwell, D-Calif., tweeted: “The Republicans won’t stop with banning abortion. They want to ban interracial marriage. Do you want to save that? Well, then you should probably vote.”

Yes—doubtless in an opinion written by Clarence Thomas.

Always on top of things, President Joe Biden’s response to the abortion opinion was to talk about…gay kids being thrown out of school. “What happens,” the advanced dementia patient asked, “if you have states change the law saying that children who are LGBTQ can’t be in classrooms with other children?”

Why does every liberal argument about allowing Americans to vote on abortion immediately veer off into apocalyptic warnings about something else entirely? I’m beginning to suspect abortion is not as beloved as liberals claim it is. As Biden wrote in his 2007 book, Promises to Keep: “If we tried to make this a referendum on abortion rights…we’d lose.”

And yet, we keep being hectored about the runaway popularity of Roe v. Wade. Apparently, poll respondents just don’t want feminists to yell at them. Yes, absolutely, Roe is great. I don’t hate women, please leave me alone.

According to the New York Times—and I don’t think they’re exaggerating the opposition to abortion—two-thirds of Americans oppose abortion after the first trimester. That’s 12 weeks. The Mississippi abortion law that’s going to turn women into birthing machines bans abortion after 15 weeks.

Also inadvertently admitted in the Times: What percentage of abortions do you think take place after the first trimester? Answer: 8%.

That’s what the termagants are shrieking about? The 8% of abortions opposed by a substantial majority of Americans? No wonder they keep changing the subject to black people.

The winner of the most clinically insane response to the draft opinion is Amanda Taub [Tweet her] of the New York Times. She explained that opposition to abortion is a sneaky way of opposing…women in the workforce? Contraception? Secularists?

Taub begins with the counterfactual proposition that evangelicals don’t really care about abortion. (Because, c’mon, who would care about that?)

Her evidence: “It is hard to imagine now, but at the time Roe v. Wade was decided, in 1973, abortion was not a major issue for the American right, or even for evangelical Christians. …”

Hmmm, why might that be? Maybe it’s because, until Roe, abortion was a crime in almost every state in the Union. Three-quarters of the states banned abortion at every stage of pregnancy. All this is admitted in the Roe opinion itself.

Hey, Amanda! It is hard to imagine, but matricide isn’t a major issue for the American right, either. On the other hand, if the Supreme Court suddenly discovers a “constitutional right” to kill your mother, I would expect that to change.

But the sleuth Taub presses on:

“The shift [to pro-life] was not spurred by abortion itself, but by desegregation. After the Supreme Court ordered schools in the South to desegregate, many white parents pulled their children from public schools and sent them to all-white private schools…the I.R.S. revoked those schools’ tax-exempt status, provoking widespread anger among white evangelical Christians and catalyzing their new role as a powerful conservative force in American politics.”

I’m sure the creation of private religious academies had nothing to do with the court banning prayer in the public schools, then banning prohibitions on teaching Darwinism and sex ed. Why would Christians care about any of that?

By the way, where did this champion of desegregation go to high school? ANSWER: Amanda Taub went to a university “lab” school that is only 5% black in a town that is 18% black.

The gigantic hypocrite concludes: “Publicly opposing desegregation was not really socially acceptable or palatable to a broader coalition. But opposing abortion was.”

Whereas the Taubs relied on admissions testing and grades to ensure their daughter went to a segregated school.

Democratic Party: Get these lunatics away from the media!

But how? We don’t have anything—

Any new variants out there?

Guess what, America? CORONAVIRUS IS BACK!