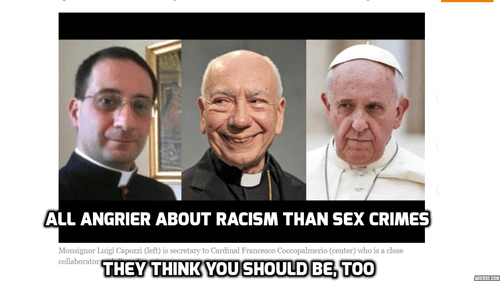 When the Catholic bishops met in Baltimore early this month, Catholic laymen like me wanted a strong statement about the “sex-abuse crisis” that has soiled the reputation of priests and bishops everywhere. We didn’t get it, apparently on orders from the Vatican. [Meeting of U.S. Bishops In Baltimore Closes With No Action After Sexual Abuse Crisis, by Michelle Boorstein, The Washington Post, Nov. 14 2018] But we did get a ringing statement about, guess what, “racism.” We didn’t need it.

Make no mistake, this crisis is about an adult homosexual conspiracy in the Church. For years, the Main Stream Media peddled the pedophile-priest myth. Catholics believed it and served the interests of the hierarchy. But most of the victims weren’t children. They were teenagers and young men. The revelations about Cardinal Theodore “Uncle Ted” McCarrick and other reports disclosed an ugly truth too secret too long: deviants are in charge, even in Rome. [Man Says Cardinal McCarrick, His ‘Uncle Ted,’ Sexually Abused Him for Years, By Sharon Otterman, NYT, July 19, 2018]

Still, we laymen hoped for the best in Baltimore. The princes of the Church who met in the City That Bleeds would surely have to say something. But they even refused to urge the release of documents on the lubricious McCarrick. Their servile obedience to the Vatican was notably unlike the outright refusal of some to allow the Traditional Latin Mass, despite a direct order from Pope Benedict. [U.S. bishop defies Vatican by requiring priests to get permission before offering traditional Mass, by Lianne Laurence, LifeSite, January 24, 2017]

But rather than focus on priests and bishops who routinely commit one of what traditionalists believe the four sins that cry to Heaven to vengeance, the Bishops moved to a more urgent matter: Catholic clergy and laity are committing a different sin of unfathomable dimension:

That’s right. The bishops strapped on armor and sallied forth with a brave statement against racism. What courage to go out on that limb! The vote was 241-3. [Bishops approve pastoral letter against racism, by Mark Pattison, Catholic News Service, November 14, 2018] (I’ve not been able to find out who the dissenters were).

Open Wide Our Hearts: The Enduring Call to Love—A Pastoral Letter Against Racism, from the bishops’ 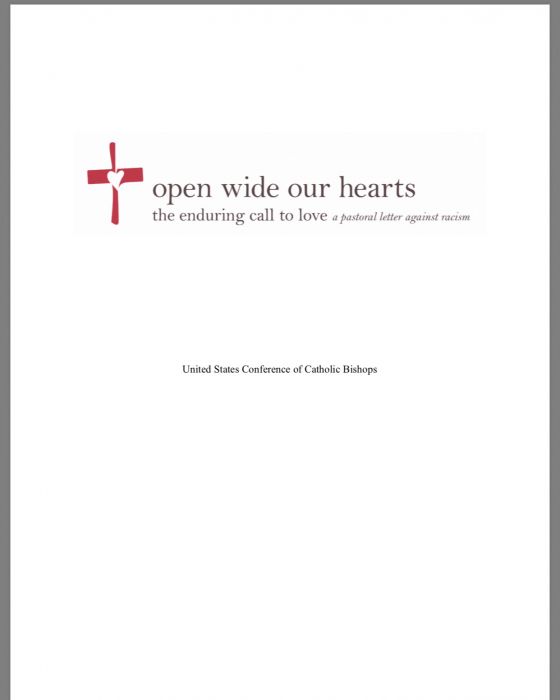 Committee On Cultural Diversity, flatly and falsely informs the Catholic layman—the same layman some bishop might well have molested—that he is most likely a racist. Don’t worry whether a McCarrick-favored priest might molest your 15-year-old son in the sacristy. That white guy by the baptismal said Trump’s right on the migrants!

Besides telling a minimally-educated Catholic nothing he doesn’t know, the letter conscripts one of the Bible’s primordial stories to impart the bishops’ false message, then peddles claims they know are false. This isn’t a profound letter from thoughtful men educated in theology and philosophy. It’s more like a lazily-assembled hit piece from an intern at the $outhern Poverty Law Center.

Herewith a few choice quotes, followed by commentary to unpack the misleading or outrightly false claims

Racism arises when—either consciously or unconsciously—a person holds that his or her own race or ethnicity is superior, and therefore judges persons of other races or ethnicities as inferior and unworthy of equal regard. When this conviction or attitude leads individuals or groups to exclude, ridicule, mistreat, or unjustly discriminate against persons on the basis of their race or ethnicity, it is sinful. Racist acts are sinful because they violate justice.

What do the bishops mean by “superior,” “inferior” and “unworthy of equal regard?” They don’t say. Part of the fun of growing up Catholic was thinking the Micks in your parish were better, smarter and tougher than the Wops in the parish three blocks over, then beating them in Catholic Youth Organization basketball and stealing their girlfriends to prove it.

But, of course, that’s not what worries the bishops. They mean white and black. Or white and brown.

Good enough. What if I refuse to shop in a certain part of town because blacks predominate and I don’t want to get mugged or murdered? What if I tell my white, 100-pound daughter not to walk to her car in a dark parking lot if she sees five blacks shucking and jiving around it, obviously up to no good. What if I think admitting blacks with low grades to college is a bad idea because they can’t handle the work? Am I a racist?

Open Wide Our Hearts claims the Bible’s story of Cain and Abel has the answer:

Racism shares in the same evil that moved Cain to kill his brother. It arises from suppressing the truth that his brother Abel was also created in the image of God, a human equal to himself. Every racist act—every such comment, every joke, every disparaging look as a reaction to the color of skin, ethnicity, or place of origin—is a failure to acknowledge another person as a brother or sister, created in the image of God. In these and in many other such acts, the sin of racism persists in our lives, in our country, and in our world.

Hmmm, I recall the nuns’ telling us that Cain’s crime was “born of his anger and jealousy,” as the Catholic Encyclopedia puts it. But now we are told that Cain murdered Abel because he didn’t believe Abel was his equal!

Next Open Wide Our Hearts launches into the obligatory-but-unspoken denunciation of He Whose Name Cannot Be Spoken, who feeds “the growing fear and harassment of persons from majority Muslim countries.” And “extreme nationalist ideologies,” the document avers, “are feeding the American public discourse with xenophobic rhetoric that instigates fear against foreigners, immigrants, and refugees.”

Which raises the National Question. Does Open Wide Our Hearts mean the “refugees” who sinned when they rushed the border in San Diego and pelted border patrol cops with rocks? Or twice-deported illegal aliens who sin when they illegally cross the border, then drive drunk and kill Americans? How about a Muslim congresswoman who sinned when she married her brother to perpetrate immigration fraud? As VDARE.com has reported, one traditional Latin Mass priest said during the 2016 election that Trump’s position on immigration was closer to Catholic teaching than that of the bishops.

Never mind that! Racism is everywhere:

Racism can often be found in our hearts—in many cases placed there unwillingly or unknowingly by our upbringing and culture. As such, it can lead to thoughts and actions that we do not even see as racist, but nonetheless flow from the same prejudicial root. Consciously or subconsciously, this attitude of superiority can be seen in how certain groups of people are vilified, called criminals, or are perceived as being unable to contribute to society, even unworthy of its benefits. Racism can also be institutional, when practices or traditions are upheld that treat certain groups of people unjustly. The cumulative effects of personal sins of racism have led to social structures of injustice and violence that makes us all accomplices in racism. ...

enforcement officials. In our prisons, the number of inmates of color, notably those who are brown and black, is grossly disproportionate. ...

We have also seen years of systemic racism. ...As an example, the water crisis in Flint, Michigan, resulted from policy decisions that negatively affected the inhabitants, the majority of whom were African Americans. ...

The evil of racism festers in part because, as a nation, there has been very limited formal acknowledgement of the harm done to so many, no moment of atonement, no national process of reconciliation and, all too often a neglect of our history. Many of our institutions still harbor, and too many of our laws still sanction, practices that deny justice and equal access to certain groups of people. God demands more from us. …

African Americans continue to struggle against perceptions that they do not fully bear the image of God, that they embody less intelligence, beauty, and goodness.

(Emphasis added). Message: All of us are racists but we didn’t know it. The bishops had to tell us!

But let’s consider a few facts the bishops ignored.

The number of blacks and browns in prison is not “grossly disproportionate” considering the crime data. [The Color of Crime, 2016 Revised Edition, by Edwin S. Rubenstein, Amren.com March 2016 ] Nor was the water crisis in Flint, Mich., the result of “systemic” or “spatial” racism, as the report upon which the bishops relied called it . [The Flint Water Crisis: Systemic Racism Through The Lens Of Flint, Report of Michigan Civil Rights Commission, Nov. 2017] Spatial racism means whites moved out of the city, now majority black. Blacks govern the city. Their misjudged decisions caused the crisis.

Again, of course any minimally-educated Catholic or Christian knows that all human beings “fully bear the image of God.” But not everyone is equally intelligent or good-looking or “good,” as least behaviorally. The Catechism acknowledges as much:

The equality of men concerns their dignity as persons and the rights that flow from it. The differences among persons belong to God’s plan, who wills that we should need one another. These differences should encourage charity.

Ask Cardinal Timothy Dolan whether the Irish like to drink and fight. Will he recoil in horror, or laugh reflexively…and knowingly? Again, though, the bishops aren’t worried about stereotyping the Irish.

Here’s what Open Wide Our Hearts doesn’t tell us: Is racism a mortal or venial sin? One might presume mortal, given the bishops emphasis, which means racism would bar a Catholic from receiving Holy Communion. But remember what a mortal sin is: one “whose object is grave matter,” the Catechism says, and “committed with full knowledge and deliberate consent.” If racism is unconscious or inadvertent, it can’t be a mortal sin. But in any event if racism is such a serious matter, certainly the laity need to know when they must confess it. The bishops, however, are silent.

All sins trespass one of the Ten Commandments. But beyond a vague appeal to Christ’s teaching on the second of the Great Two—to love one’s neighbor as thyself, which subsumes commandments four through 10—the bishops are, again, silent. Why?

They likely didn’t think of answering because Open Wide Our Hearts is not a moral or theological statement. It’s political.

Which explains this frightening admonition:

Catholic schools, and Catholic publishing companies [should] develop curricula relating to racism and reconciliation. Our campus ministers should plan young adult reflections and discussions that strive to build pathways toward racial equality and healing. ... We also charge our seminaries, deacon formation programs, houses of formation, and all our educational institutions to break any silence around the issue of racism, to find new and creative ways to raise awareness, analyze curricula, and to teach the virtues of fraternal charity.

“Break any silence” about racism? Have these men visited a Catholic campus lately? The silence-breaking is nonstop! [Faculty Senate Hears Students on Institutionalized Racism at Fordham, by Ana Fota, Fordham Observer, November 19, 2015]

Apropos of what the bishops, again, didn’t do, Open Wide Our Hearts inadvertently confirms what intrepid writers such as George Neumayr have reported: A Lavender Mob now runs the Church. Open Wide Our Hearts is exactly the type of nonsense you would expect from an institution dominated by self-hating Leftist homosexuals—if they hadn’t been caught.

But they were caught. So here is a second, more unpalatable truth. They didn’t just say “nothing to see here, move along.” They shouted, “look, a racist!”

They accuse others of sin to hide their own.

Eugene Gant [email him] no longer lives in Baltimore.